Types of companies included in this guide

My primary focus is railroading

and my project goal is to describe every stock and bond issued by and for every railroad company that operated or intended to operate in North America.

There is no general agreement on the definition of railroading, so this page explains the limits of my project

and this page shows visually the process for deciding what companies belong in this project.

Background. Collectors constantly find certificates from companies with peripheral rail involvement and they inquire whether I will include them in this catalog. I understand. They want to have their certificates listed in a price guide. That was that precise reason I took on this project in the first place. The LaBarre, Yatchman and Hendy price guides preceded my efforts by many years. Those ground-breaking works included hundreds of railroad certificates, but only scratched the surface. I wanted a price guide that listed all railroad certificates. I thought the hobby deserved a specialized catalog.

Within hours of recording my first certificates, I realized I needed to control the types of companies I included. Even at that early date, it was apparent that every minute I spent off-topic was a minute I could not contribute to my main goal. Since then, I have tried to keep my goal simple and explicit.

Regrettably, what seems simple and explicit to me is almost impossible to convey in print. Consequently, I have spent hundreds upon hundreds of hours explaining why some companies are allowed and others rejected.

Railroads versus non-railroads. Establishing and maintaining a clear dividing line between railroads and non-railroads is quite difficult. The definition of "railroad" is hard to pin down because vast numbers of non-railroad companies operated railroad equipment at one time or another. For that reason, many companies can seem close to railroading when, in fact, they are not.

Not knowing the process involved in gathering information, collectors assume it takes minimal time to include a few extra near-railroad companies in my project.

They don't realize that every extra company creates time committments that extend into the future for as long as this project lasts. The committment also extends backward in time. That means that I must review all old catalog and price lists for past appearances. Every old reference needs to be re-examined. Researching past certificate appearances usually takes a minimum of thirty hours each.

Focus. Focus. Focus. I want to warn would-be "devil's advocates" that I will focus on my core topic with laser-like clarity. I add new railroad companies to the database continually. I will NOT add any off-topic companies.

Commonly, collectors suggest new off-topic categories "because I already list similar companies in the database." When that happens, I search the database and remove those off-topic companies.

Selection criteria. Here are my rules for deciding which companies to include and which to exclude. My requirements encompass four main categories:

Location. My area of interest is North America. Railroad companies must have intended to operate in:

I do not allow any exceptions to this rule. Companies organized elsewhere are included if they intended to operate or finance railroads within the area I define as North America. I exclude all railroad companies that intended to operate outside of North America, regardless of where they incorporated. Several South American railroads were financed by companies incorporated in Maine and New York. Those companies do NOT get into this database.

Corporate name. At the risk of sounding redundant, this project is meant to catalog certificates from railroad companies. The closer a company name implies a connection to railroading, the more likely it is to appear in my catalog.

The easiest companies to include are those which used "railroad" or "railway" in their names.

Corporate names create a large area of disagreement. Corporate naming is a vast area of conflicting opinions. I recognize and accept disagreement. Nonetheless, my stance is pragmatic, perhaps to a fault. The harder it is to make connections between company names and railroading, the less likely those companies will appear in my catalog. My opinion is:

Companies which include the words listed below almost always qualify for my project. 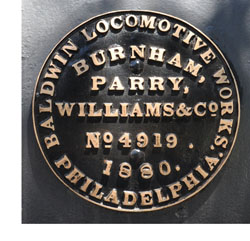 Minimal research. The more research it takes to connect a company to railroading, the less important that company is to this project. When it takes more than rudimentary research to prove railroad involvement, I assume the company is too far from railroading. I added this additional filter as a crucial requirement when I finally realized the exorbitant amount of time I had spent explaining why companies with minimal rail involvement do not deserve to appear in my catalog. (Here is an extended discussion of my rationale for not allowing tedious research.)

Exceptions to all rules. Two decades of effort have proven that every collector can find exceptions to every rule I have ever devised. Still, my initial intent remains intact: to list certificates from North American railroad companies.

What about ICC reportage? Over sixty years after railroading began, the United States Congress created the Interstate Commerce Commission in 1887. Reports to the ICC theoretically showed companies' intents to operate as common-carrier railroads. It is clear that certain mining, manufacturing and bridge companies reported to the ICC as common carriers although their motivations may have had to do more with tax treatment and bureaucratic definition than genuine efforts to carry freight or passengers competitively. At the opposite end of the spectrum, some railroad companies purposely avoided common-carrier designation through choices of corporate names, special transportation arrangements and even land ownership.

The purpose of this project is to list collectible certificates. I refuse to waste my time researching ever-flexible corporate motives. I think it tedious beyond description to waste my precious time trying to understand corporate schemes relative to governmental oversight. For that reason, I do not consider ICC reportage to be relevent for deciding whether to include or exclude companies.

Practical matters. I already spend thousands of hours per year describing certificates and recording prices for legitimate railroads and railroad-related companies. Every minute I spend on non-railroad certificates is one minute less I have for my core project.

I firmly believe that given a choice, average collectors of railroad certificates would prefer that I spend my time describing and pricing collectible stocks and bonds from railroads. That is the approach I will take.