How can you tell whether a certificate was issued or not?

Why does it matter whether a certificate was issued or not?

Experienced collectors assign value to certificates like this, arranged from most value to least value:

Specimens and proofs are special kinds of certificates, never meant to be issued. Depending on variables such as company, vignettes, printer, and other features, collectors generally value specimens and proofs near the top of the scale. See more at More than you EVER wanted to know about Specimens and Proofs.

The characteristics of issued certificates.

Why is it sometimes hard to tell if certificates were issued?

There were over 25,000 railroad-related companies that employed hundreds of thousands of people who issued certificates over the course of a century and a half. No matter the numbers of checks and balances, few companies ever issued stocks and bonds without making mistakes. Moreover, business practices and corporate customs varied widely between companies. Inconsistency is a certainty.

Hundreds of legitimately-issued certificates lack one or more features that almost everyone would agree was necessary.

To further confuse matters, thousands of partially-issued certificates show many features that would indicate legal issuance.

Partially-issued certificates: often show one or more features of issuance. However, even taken together, the features are not sufficiently compelling to prove certificates were issued.

Non-issued certificates: show few, if any, features of issuance.

In the early days of European "joint stock" companies, stock certificates and bonds were "bearer" instruments. People who held such certificates were considered true and rightful owners, regardless of how they acquired their certificates. Companies often could not tell the differences between criminals and their victims. By their very nature, bearer instruments, had significant problems.

Fortunately, only a tiny handful of stock certificates issued in North America were bearer instruments. This means that essentially all American certificates indicated owners' names and those names were registered on the books of companies.

By contrast, half all North American bonds were bearer bonds and consequently display no owners' names that might help indicate legitimate issuance.

By the mid-1890s, registered bonds had gained popularity and owners' names began appearing in greater and greater numbers.

There were numerous exceptions to this rule. Primary officers could have been vice-presidents, presidents pro tempore, and so forth. George Gould is known to have signed many MKT certificates as "3rd vice president."

As fortune would have it, essentially all legitimately-issued certificates display primary officers' signatures. (For further discussion, see also Why do some certificates lack signatures?)

Legitimately-issued certificates should show two signatures, but when a signature is missing, it is often that of a secretary or treasurer.

In the earliest days of railroading, companies were small and dealt with few investors. Investor turnover was usually limited.

As time went by, companies consolidated and merged into increasingly larger and larger companies with larger and larger numbers of investors. The length of time investors held securities dropped steadily, meaning that companies had to spend more and more time transferring ownership and recording transactions. 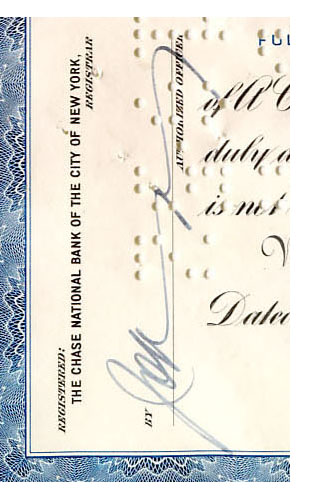 It is hard to pinpoint exactly when trust companies and banks assumed this important role, but their signatures appear sporadically before the 1900s.

By the late 1920s, the turnover of securities became huge. Trust companies, banks, and clearing houses became monumentally important to the orderly buying, selling, and transfers of securities. By the time of the 1929 stock market crash, trust company registrations were almost universal.

As these outside service companies became prevalent, bank note companies printed special signature lines for trust company and bank registrars. Once this practice became formalized, the number of problematic certificates dropped dramatically. Trust company signatures were the last signatures applied and represented, therefore, the last step where accuracy was checked.

As a rule, IF there is a space for a trust company or bank signature on a certificate, and that signature is blank, then the certificate was probably NOT legitimately issued. There may be exceptions, but those exceptions will be highly rare.

Bonds often have spaces for signatures of two or three trustee. Trustee signatures commonly appear on the backs of bonds, often on the panel meant to be seen when the certificates was properly folded.

Trustees were often important industrialists, so some signatures carry significant collector values, far above the value of the certificates on which they appear. This example shows the signatures of Cyrus Field and Charles Lanier.

If other bonds of the same series do not show trustee signatures, then the absence of signatures carries no implication whatsoever. 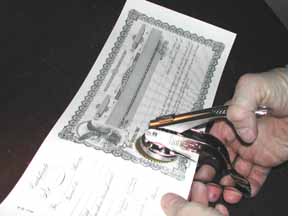 Corporate seals are official impressions made with a handheld or electric, plier-like device . The jaws of the embosser hold a circular die, that when squeezed, crinkles and breaks paper in a design that shows a company name.

Corporate seals are used to impress deeds, contracts, and other official documents including stocks and bonds.

If stock or bond certificates show the impressions of corporate seals, then there is high probability that the documents were officially issued. 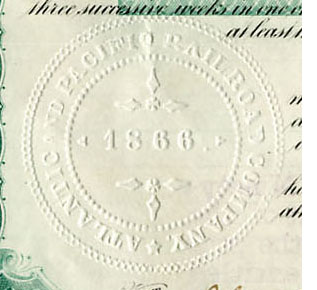 Many old deeds and documents, including stocks and bonds, show corporate seals embossed on colored paper that was applied to the body of documents. The colored paper often had a light adhesive on the back. It seems likely that clerks licked and applied circular or square paper seals immediately before embossing with corporate seals. The colors of the applied paper seals was insignificant and highly variable.

The dates of bearer bonds are normally printed at the bottom right side of certificates, immediately above presidents' signatures. Virtually all other stocks and bonds carry handwritten, typed, or rubber-stamped dates. Dates were probably the least important part of certificate issuance, so collectors can frequently encounter legitimately-issued certificates without dates.

By itself, the presence or absence of dates neither proves nor disproves legitimate issuance.

However, when taken with other features such as signatures, the absence of dates can be very important. For instance, missing dates combined with missing signatures is nearly conclusive evidence of non-issuance.

To my knowledge, all legitimately-issued certificates that lack serial numbers are those where serial numbers were meant to be handwritten (like the example on the left below).

As you can imagine, writing serial numbers by hand was time-consuming and prone to mistakes. Therefore, just because serial numbers are absent is not proof of non-issuance. Rather, like other indicators of issuance, serial numbers must be considered with other features.

For instance, if a certificate lacks a serial number AND lacks an embossed seal, then there is almost 100% certainty that the certificate was not fully issued.

Numbers of shares or bond value

I feel safe in saying that all legitimately-issued certificates show either numbers of shares or bond values. I do not know of a single exception.

If certificates lack numbers of shares or currency values, I think you can safely say certificates were not legitimately issued.

Partially issued certificates (certificates that were voided for unknown reasons prior to delivery) CAN also show share or dollar values. And therein lies my typical advice. Certificates that display values, must show additional features that fully confirm genuine issuance.

The United States government required tax patments for stocks and bonds issued during two periods of American history: 1862-1872 and 1898-1901. Additionally state governments and certain European governments taxed those transactions at other times.

During those periods, it was common to pay taxes by affixing revenue stamps to fronts of stock certificates. The payments of taxes on bond transactions were more variable. Bonds can carry revenue stamps, but in many places, it was legal (and much less troublesome) to affix stamps to the original mortgages against which the bonds were issued.

When revenue stamps were applied to certificates, they were often "tied" to documents by handwritten dates, initials and rubber stamp impressions.

Dealing with revenue stamps benefited the government, not the companies. In an effort to streamline the process, companies often paid taxes in advance and pre-printed stock and bonds with colored revenue imprints.

On the opposite side of the equation, there are legitimate certificates known to have been issued during both periods that lack the required revenue stamps.

Considered alone, the presence or absence of revenue stamps (during the required taxing periods) can neither confirm nor deny the legitimate issuance of any certificate, even if the stamp is "tied" with a signature or rubber stamp. Instead, revenues should be considered among other features when trying to decide whether certificates are fully-issued or not. (Special thanks to Eric Jackson for help with this section.)