If YOU want to know about cancellation from the perspectives of collectors, certificates will USUALLY tell you everything you need to know.

The codes used in this catalog are ...

If you think you might own a certificate with potential security value, then either you or your representative must contact the original company or its successor.

Please be warned that company records unquestionably prevail when determining security values. Just because a certificate shows no physical cancellation will not matter.

Please see Certificates with values as securities to learn more.

The cancellation process for securities. While extremely few paper stocks and bonds are issued today, most collectible certificates followed this process:

Recording was crucial. As you can imagine, the process of recording security transactions was critically important. Corporate ownership was of primary importance, so companies worked very hard to maintain documentary evidence. Having said that, fires, floods and disasters have always found ways of destroying corporate records. Physical cancellation has always been a secondary and definite way of preserving evidence of transference of ownership or retirement of debt.

So how important is it to know whether certificates are cancelled or not?

It is especially important when dealing with autographed certificates. The more valuable the autograph, the more you need to know whether it is cancelled.

While there are noticeable differences, cancellation does not seem to matter as much as one might think!

In fact, prices realized from major live auctions prove that there can be minimal price differences when certificates are extremely rare.

Methods of cancellation varied widely through time and between companies. Relatively few companies cancelled all their certificates in the same manner over any extended period of time. 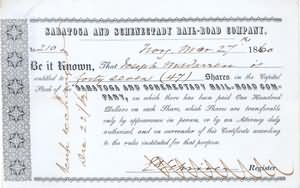 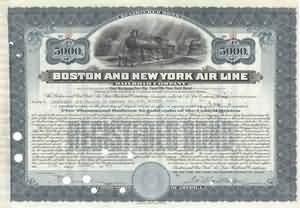 Perhaps the most common method of cancellation involved punching holes were through certificates. Punch holes were normally an eighth to a quarter-inch (2-4 mm) in diameter. Stock certificates were most often punch cancelled with two or more holes in officers' signatures. Sometimes, holes were punched through corporate seals and less frequently through vignettes. 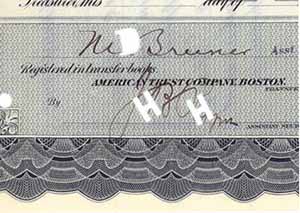 Punch cancellations were normally simple round holes, but about 10% of certificates show punches in the shapes of letters. It is possible that the letters had significance for companies at the time of cancellation, but their meanings are lost today. 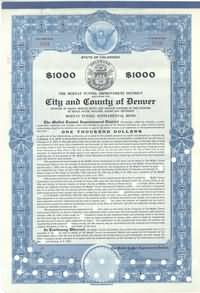 Some companies used a wheel-like device that punched rows of holes across certificates.

The bond in this photo looks like it was sprayed by a machine gun. Hence, collectors often call this style of cancellation "machine gun" or "bullet hole" cancellation. 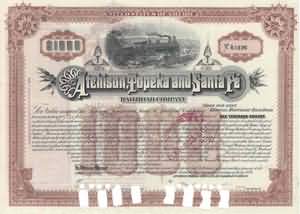 Occasionally, punch cancellations removed large pieces of paper. Sometimes, they were three-quarter-inch holes or larger diamond- or rectangular-shaped holes. Rectangular punch-out cancellations were fairly popular on AT&SF and Northern Pacific certificates around the turn of the 20th century. 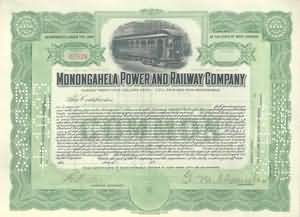 This form of punch cancellation is made up of a series of tiny holes, usually spelling out words or dates. This method of cancellation became exceedingly popular after the 1930s. 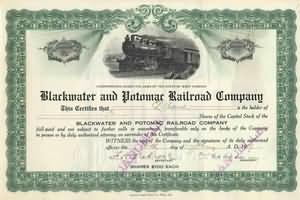 Cancellation by rubber stamps was very common from the 1880s to the 1920s. Rubber stamps usually spelled the words "cancelled" or "void." Red, black and purple inks were most common with blue ink used less infrequently. The majority of certificates that show rubber stamp cancellations also show pen or punch cancellations. 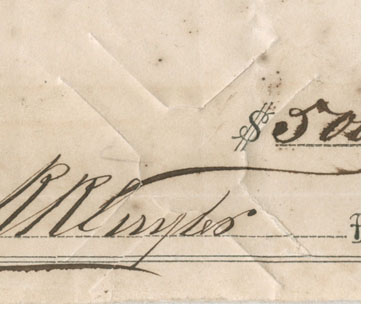 Certificates were sometimes cancelled with a hand-operated device that resembed a stapler. The clerk would place a certificate between the jaws and hit the top with the edge of the hand. Razor blades hidden in the top would cut the paper in either 'X' or circular patterns.

This kind of cancellation is hard or impossible to detect in photographs. Certificates cancelled in this manner are commonly repaired with archival tape. 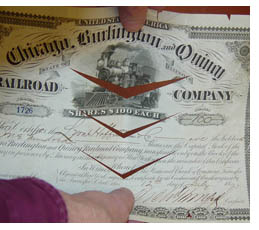 Similar, but more radical types of cut cancellations are sometimes seen. Occasionally, certificates were sliced with what appears to have been a knife or razor. Cuts can be a couple inches long, but often extend four of more inches in an "x" pattern in the centers of certificates. As long as paper is not torn, certificates look completely intact until they are handled.

This photo shows a type of mechanical cancellation commonly used on Chicago Burlington & Quincy Railroad stock certificates. This type of cancellation was used sparingly by other companies. Warning: these types of cut cancellations almost never show up in photographs. It was a little hard to make them visible here.

This type of cancellation disturbs paper fibers by impressing a repetitive design into paper, generally, in the signature area. Most Standard Oil Trust certificates are cancelled in this manner although the cancellation seems extremely rare elsewhere. Unless images are very high resolution, impressed cancellations are impossible to see in photographs and scans. 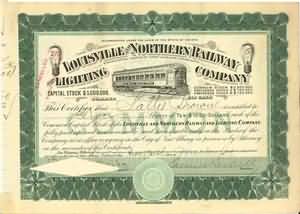 Occasionally, large amounts of paper were removed, normally by slicing away officers' signatures. In a few rare instances, rectangular or triangular cuts removed corners of certificates.

Fortunately, this type of cancellation is scarce. 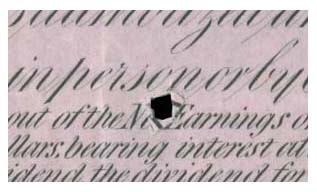 Stock certificates were sometimes cancelled by impalement on long, thin nails called "spindles." Holes are often only an eight of an inch in diameter, and therefore hard to see in photos. Damage tends to be very minimal.

These kinds of spindles had small three-finned "arrowheads" on top. When certificates were impaled, the arrowhead left a triangular cut pattern.

Illinois Central certificates from around 1850 were cancelled with what appears to have been a rag soaked in dilute red ink. I have never seen this type of cancellation on certificates of any other company.

What about bonds and related certificates that have rubber stamp impressions? Are they cancelled?

It depends. If the impressions clearly state "cancelled," then those certificates are definitely non-negotiable.

Many bonds and certificates of deposit, however, show stamped or printed impressions that either extended terms, changed terms, or recorded partial repayments. Those kinds of impressions do NOT constitute cancellations. However, many sellers never read the text of the rubber stamps and just assume they were cancellations. 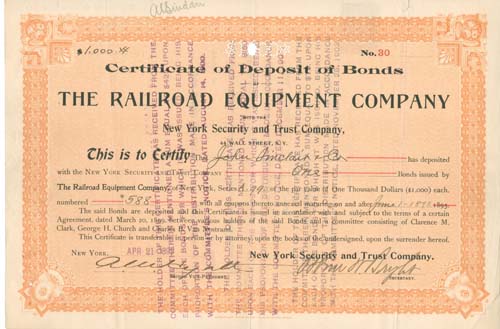 It is quite common to find one or more rubber stamped or printed impressions attesting that partial repayments had been made. If full repayments were never made, those certificates were never actually paid off. In the absence of other evidence, such certificates remain uncancelled.

This company had apparently gone into bankruptcy. A reorganization committee formed and subsequently issued certificates of deposit for outstanding bonds. The company was later liquidated and proceeds were given back to original bondholders. Over the next few years, the committee made three payments amounting to a total of $650 for every $1000 bond. Since the original bonds were never paid off, these certificates were never officially cancelled. I, therefore, consider these kinds of certificates "uncancelled." (Note, the hole at top center is not a punch cancel, but piece of paper missing from the '$1000' pinhole value impression.)

There are thousands of certificates that show evidence of transferral, but which lack physical cancellations. As mentioned at the top of this page, many certificates went through the entire process of transferal, but for some reason escaped physical paper cancellation.

Were those kinds of certificates cancelled?

Almost all collectors can agree these kinds of certificates retain no security values. Therefore, they must have been officially cancelled. Nonetheless, collectors still buy and sell them as "uncancelled" simply because there is no evidence of physical cancellation.

Yes, it is true that official records of transferral or debt retirement might exist in corporate records. Those records are rarely available to collectors. In fact, it might cost hundreds or thousands of dollars to find records if they even exist at all. Consequently, collectors must depend upon physical condition alone. If certificates are untouched by physical marks of cancellation, collectors usually consider them uncancelled. If buyers and sellers disagree, then the disagreement is settled by a checkbook and not by a court.