GALLERY of all known Bourne engravings

RARITY. Explanation of my rarity system for Bourne engravings.

VALUATION and INSURANCE. A page for those of you with questions about valuing and insuring the large handsigned Doré engravings.

STAMPS known to have been engraved by Herbert Bourne.

PLEASE WRITE concerning Bourne prints. Before writing for "more information," please understand I do not have any additional hidden knowledge. This web page and links represent everything I currently know about Bourne, his engravings, and the huge Doré prints.

Bourne is known to have created BIBLE ENGRAVINGS, but I have never seen the Bible in person. I strongly suspect all those Bible images are already included among the engravings listed here, but my proof is lacking.

I became aware of "H. Bourne" in the 1990s when I stumbled across a superbly framed example of The Tambourine in a shop in Idaho Springs, Colorado. I already owned works created by American bank note engravers such as Alfred Jones, the Smillies, Robert Savage and others, but I had never encountered Bourne. The tremendous skill displayed in The Tambourine sent me off to try to discover who H. Bourne was.

Bourne was a British portrait engraver who produced much of his work on a contract basis for major publishing firms and stamp engraving companies. His illustrations appeared in numbers of magazines that promoted art appreciation on both sides of the Atlantic during the 1860s, 70s and 80s. Most of his engravings survive because the magazines were cut apart and the prints were saved as works of art. So far, I have identified about 100 engravings attributed to "H. Bourne." I have not seen all the prints in person and it is possible some are the works of a similarly-named engraver.

All the prints I have encountered were intaglio (pronounced in-TALL-ee-oh) engravings produced with steel plates between the early 1850s and the late 1880s. I personally suspect Bourne learned his craft by engraving on lithograph stones in the 1840s, but I've uncovered no such evidence so far.

Existing engravings. Most of Bourne's signed works were produced by England's major publishers of the day including Virtue & Co., Gebbie & Barrie and Blackie & Son. A few engravings were also produced in the United States by Appleton & Co. While a few were produced in smaller formats, most of the engravings that survive are typical page-size works, roughly 7 to 9 inches wide by 10 to 12 inches tall. Most such engravings usually sell for $5 to $25.

Doré engravings. Without doubt, Bourne's most impressive works appeared in a series of engravings of Gustave Doré paintings. Fairless & Beeforth commissioned engravings of twenty-nine of Doré's works for their Doré Gallery in London between 1867 and about 1886. Several of the engravings were huge, about 22" x 32.5". Seven of the 29 engravings of Doré's paintings were executed by Bourne, more than any of the other eleven engravers involved in the project. (Les Tenebres was executed by Bourne and William Ridgeway.) Prints from the original steel plates were produced over an extended period, but many examples are known to have been signed in pencil by both Doré and Bourne. [Thanks (!) to Dan Malan and his book, Gustave Doré: Adrift on dreams of splendor for contributing these obscure details.]

Engravings on postage stamps. Bourne's smallest and least impressive works were engravings that appear on postage stamps for several countries. Not being a specialist, I do not have a complete list of his accomplishments in philately and desparately solicit help on this subject. So far, I have found reference to his work on stamps for Chile, Costa Rica, Ecuador, Falkland Islands, Haiti, Liberia, Nyassa, Queensland, Spain and Uruguay.

Bible works. Reliable references indicate that one or more Bourne engravings appear in The Practical and Devotional Family Bible: the Holy Bible containing the Old and New Testaments according to the authorized version by Henry Matthew, Thomas Scott and John MacFarlane, 1864. I have confirmed at least four versions of this Bible edition exist, only one of which has images by Bourne. A librarian at Yale University kindly confirmed that its edition is one such printing. I do not know the specific images contained therein, but I strongly suspect that St. Agnes, St. Barbara, and St. Catherine are among them.

Birth and death dates. Bourne lived between 1825 and 1907 and seemingly spent his entire life on the north and northwest sides of London. He was involved in engraving as early as 1841 and seemingly engraved his entire life. A compelling account by Fred J. Melville in Chats on Postage Stamps, 1980, suggests that Bourne, like many highly-skilled artists, never valued his own work very highly. Although Melville acquired some examples of his personal relics, he states that Bourne destroyed most of his personal accumulation before his death. (Melville's reference can be found on the web.)

As indicated above, Bourne's middle initial seems to have been "K. ", although I have found no confirmation in genealogical referencces. Nor does any "H. K. Bourne" appear in any British census between 1851 and 1891. His full name remains a mystery to me.

Of greater importance is a very noticeable difference in engraving quality among Bourne's works that I cannot explain by age or experience.

For instance, Bourne's attribution appears on a series of unsophisticated images produced for Pictures and Royal Portraits Illustrative of English and Scottish History in 1886. Timewise, those somewhat crude engravings are sandwiched between The Knuckle-Bone Player (1884) and The Tambourine (1888), engravings of unassailable skill, quality and nuance.

Looking earlier in time we see the superbly skillful work of Henrietta of Orleans (1852) followed a few years later by the somewhat crude Last Moments of the Czar (1857). I feel safe in claiming that steel plate engravers, as a lot, were obsessive about appearance and details. Consequently, I am at a loss to explain such obvious differences in execution.

It is possible, of course, that there were ...

Other engravers named "H. Bourne." At least two other British engravers with the surname of Bourne are known. These include "R. Bourne" whose engravings (The Last Toilet of Charlotte Corday and The Departure) appear for sale every couple of years. Quite scarce is a single engraving by "T. Bourne" titled Family Devotion.

Father-son engravers are not uncommon, but neither "R. Bourne" nor "T. Bourne" appeared in Bourne's immediate family. Nonetheless, Herbert Bourne had two sons, each recorded in a British census as short-time "engravers." Whether they were portrait engravers or silver engravers is unknown. Consequently, whether sons Harold and Herbert could have been responsible for some "H. Bourne" works remains an open question. 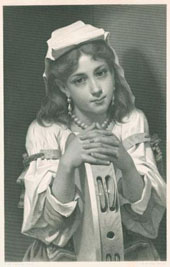 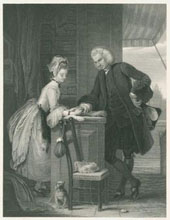 Yorick and the Grisette

The Death of Cleopatra 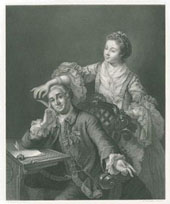 Garrick and His Wife 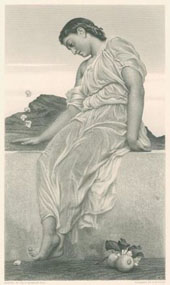