Here are the most common types of bonds you will encounter

Collateral is an important aspect of bonds. In today’s home-buying market, people borrow money from banks and use their homes as collateral. If homeowners fail to re-pay loans, banks evict them, repossess homes, and sell the real estate to try to recover as much of their original loans as possible.

Like homeowners, railroads usually offered collateral when they borrowed money from investors. They often guaranteed their mortgage bonds by using all conceivable combinations of land, equipment, locomotives, and rolling stock as collateral. When companies failed to repay their bonds, courts forced them to liquidate their holdings in order to re-pay investors.

Some railroads did not bother with collateral. They did not secure their loans at all. They guaranteed nothing. Such loans are called debentures. Instead of being secured by property, debentures are secured by company reputations and nothing else. A convertible debenture allowed investors to convert bonds into stock under specific circumstances. Only about 6% of collectible bonds are debentures.

The Railroad Act of 1862, and its later modification by the Pacific Railroad Act of 1864, granted land to railroads to entice them to lay tracks across the West. In some cases, the U.S. granted as much as 50 square miles of land per mile of track laid. Once companies gained title to the land, they attempted to sell land in order to raise money for rail building. A few companies sold bonds and used their land grants as collateral. So far, 69 varieties of land grant bonds appear in this catalog. Click here to learn more about land grants. 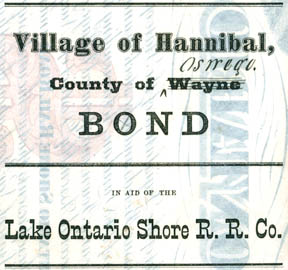 This catalog lists approximately 255 bonds issued by public entities to aid the building of railroads. While the wording and purposes of these kinds of bonds varied from place to place, the concept was fairly simple. If people wanted to get rail service into remote towns, cities, townships, counties, and states, they made deals with railroad companies. Public entities agreed to help pay for railroad building if companies agreed to provide service. 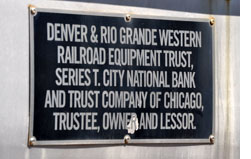 From companies' perspectives, leasing equipment through trusts is often substantially more advantageous than buying equipment through ordinary loans. The economic rationale lies with the complicated relationship between interest rates, inflation rates, depreciation and tax law. In short, companies may deduct all their equipment lease payments made to trusts. Conversely, they can only deduct interest payments made on ordinary bonds. The higher the prevailing rate of inflation, the more advantageous equipment trusts become. If visiting railroad history museums, you can often see plaques on locomotives and rolling stock testifying to ownership by equipment trust companies. (The plaque at left was found at the Colorado Railroad Museum in Golden, Colorado.)

Equipment trusts have always functioned in the middle ground between stocks and bonds. Strictly speaking, equipment trusts are organizations completely separate from railroad companies. Equipment trust certificates usually resemble vertical format bonds, but equipment trusts were often sold in 'shares' of $1000. While it seems a semantic argument, equipment trusts paid 'dividends' to investors instead of interest, generally in percentages similar to typical bonds.