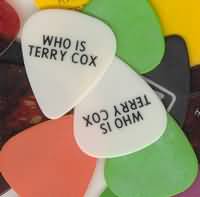 You're not the first to ask, "Who is Terry Cox?" I guess I'd better give you a brief biography.

I was born in 1950 and was raised in Madison, Indiana, an historic port town on the Ohio River, about midway between Louisville and Cincinnati. Madison was founded a few years before Indiana became a state, so the town boasts a huge supply of Federal-era architecture. If you're ever passing through the region, make sure you take time to tour the city. 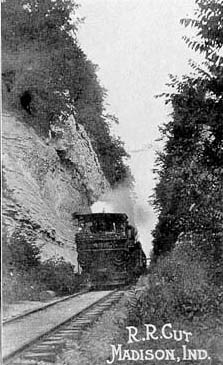 (At left is a view of the Madison & Indianapolis Railroad grade at Madison. This line ultimately became a branch of the Pennsylvania RR. The 5.89% the grade climbing out of the Ohio River Valley is the steepest non-cog rail grade in the U.S.)

I went to Indiana University during the turbulent period of the late 60s and early 70s. Fortunately, I avoided most of the unrest and student protests by spending a tremendous amount of time underground.

By "underground," I mean exploring and mapping caves. I loved mapping and yYou may still find my name associated with maps of caves of southern Indiana plus a few in Kentucky and central Mexico. Sadly, the intervening years have closed many wonderful caves to exploration. 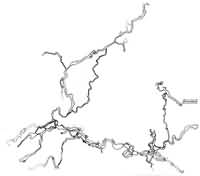 (At right is a map of Wayne Cave near Bloomington, Indiana. This tiny illustration shows over 3 miles of passages. Greg Spaulding and I mapped this cave in the early 1970s. )

Caving is known as "spelunking" by non-cavers. The hobby led me to many life-long friends and a degree in geology. When not underground, I was homored to get to work for both the State Geologist and the State Coal Geologist at the Indiana Geological Survey.

My first job after graduation was working for Amax Coal Company and I soon trotted off to the Appalachian Mountains to explore for coal. I ultimately moved to West Virginia and spent my time evaluating coal properties all over the Appalachians, from Alabama to Pennsylvania. I cannot imagine how many surface and underground coal operations I visited during those years. It seems like I was underground continually.

I loved working in the East, but my many hiking trips in the Grand Canyon drew me west. In 1977, I moved to the Denver area to work for Rocky Mountain Energy (RME), a subsidiary of the Union Pacific Corporation. Over the next decade, I spent the majority of my time evaluating large coal properties for purchase. 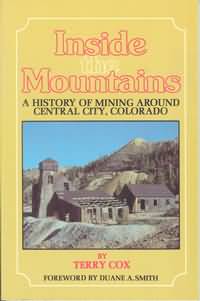 That work gave me the wonderful opportunity to work in every major coal field in the western United States, from Texas to Alaska. It also taught me about corporate negotiations and financing.

Oil and gas prices collapsed in the late 1980s and allowed many power plants to switch from coal to gas. Good for them; bad for coal geologists. Realizing that coal was going to experience a multi-year down cycle, I moved on to other endeavors.

In 1989, Pruett Publishing published my first book, Inside the Mountains, a history of mining around Central City, Colorado. That book is out of print, but you can still find it occasionally on Amazon and Alibris.com.

Between 1985 and 1992, I was a dealer in collectible paper money including fractional currency, obsolete currency, large U.S. currency, souvenir cards, Confederate currency, and Confederate bonds. Sometime in about 1988, I encountered my first opportunity to sell railroad stocks and bonds. 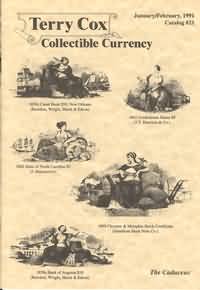 Within hours, I realized that pricing information about stocks and bonds was nearly non-existent. There were three small, now-classic volumes by George LaBarre, but little else. (His work is occasionally acquirable from Alibris.) Out of desperation, I started collecting information about certificate prices.

Even today, selling collectible paper remains a part-time occupation, but I continued with other more lucrative money-making endeavors. I taught a few courses on business writing while I played geologist for an engineering firm. My wife and I also started a small bookstore in the Colorado high country. 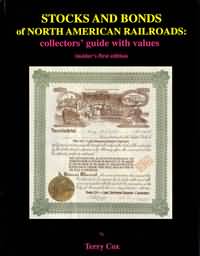 By 1994, I had compiled sufficient information for a catalog on prices for collectible stocks and bonds. BNR Press kindly accepted the project and published my work in December, 1995. Examples of that first edition occasionally appear for sale on eBay.

The first edition of my catalog had sold out by 2000. By that time, the amount of new information about stock and bond prices had doubled the size of my database. While BNR wanted to publish the second and successive editions, scheduling problems delayed publication several times.

As a bridge between the first and second editions, I started this website in June, 2000. That invited a flood of new correspondents and new submittals, making the second edition even more imperative.

Late in 2002, I ultimately realized that I would need to publish the second and successive editions myself. Self-publishing was not what I wanted to do. It is a big hassle and is NOT a money-making venture. However, like caving, mining history, and Gingerbread Bookstore, this project is a labor of love. I finally published the second edition in November, 2003.

The database of information continues to grow ever-larger with the continual contributions from collectors around the world. About 75% of my current correspondents live in the United States with most of the remainder in Germany. This wide-ranging group of people is crucial because not all U.S. railroad certificates are available in the U.S. Some certificates sell only in the U.S. and are very hard to find in Europe.

This website contains over a million records of sales or attempted sales of stocks and monds. However, you may find even more of my writing about collectibles at my Coxrail blog, my Coxrail Facebook page, and my special site about British engraver Herbert Bourne. I also write a column about collecting stocks and bonds titled Cox's Corner for the hobby magazine, Scripophily (a publication of the The International Bond and Share Society.)

After fifteen years, I decided to publish the third edition of "Collectible Stocks and Bonds from North American Railroads" (below left.) The book is shipping and now lists about 28,000 varieties of railroad stocks and bonds. 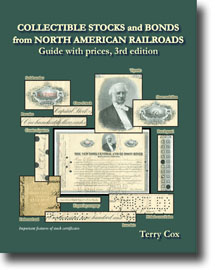 Looking back over my meager accomplishments, I discovered that I had built my life around one recurring theme. Whether caving, hiking, analyzing large coal projects or cataloging certificates, I know I can accomplish almost nothing without partnership. I know my own limitations only too well. I could never have accomplished this huge information-gathering project without the help of others. Many others. Hundreds of other people on two continents!

Once I realized this, I discovered the next higher truth. People WANT to help. Give people an opportunity to help and they get to share the great enjoyment of being involved. Like me, they get to enjoy their hobby even more.

So, thanks. Thanks to everyone who has helped with this project. I am in your eternal debt.

(What are the guitar picks at the top of the page all about? It is evidence of yet another passion that dates from 1969. I play mandolin, write songs and was the lead singer in a bluegrass band called Credibility Gap. Dobro musician Max Hannum and I formed our band in 1984 and there have been only three personnel changes since! We recorded an album in 2000 and played several festivals. While I pulled the plug on my live perfomances in 2016, we still play every Tuesday night, or at least every Tuesday night when everyone is available. Max and his wife have been staging semi-annual bluegrass parties for Denver's finest bluegrass musicians and friends for many years. I'm honored to create all the artwork. You may see all past posters at MaxfestArt.)