The differences between bearer bonds
and registered bonds

Investors, whether as owners or creditors, have always valued their privacy and it remains especially true today. In the earliest days of joint stock ownership (corporations owned by many separate share holders), companies did not record stockholders' names. However, paper stock certificates were so delicate and prone to loss that most companies began recording owner's names very early in the United States.

It took much, much longer for companies to begin recording the names of its bond holders.

In most countries, individuals, groups of individuals, partnerships and corporations can loan money to companies and receive bonds in return. Bond certificates normally promise to pay interest at specific rates and to repay principal to bondholders at specific times. On the other hand, bonds may or may not mention the identity of bondholders.

It is crucial to understand that bondholders and bond owners are normally the same entities. It is not a requirement, however.

Such threats to profitable ownership over extended periods are the reasons bearer bonds disappeared from the corporate landscape. They survived a couple decades longer among municipalities and public entities, but essentially all those bearer bonds are now gone, too.

Registered bonds have always been more secure. Companies keep records that bondholders' names with specific serial numbers. Registered certificates usually show the names of owners on the fronts. Owners may sell bonds to anyone they wish, but they must inform companies so clerks can transfer registration. Companies forward interest payments and principal to registered bond holders. On the flip side, registration shifts the responsibility for paper work to companies. Tax collectors like registered bonds because they can trace taxable income more easily.

Early bonds were usually bearer bonds. The popularity of registered bonds began increasing throughout the 1880s and dominated the scene by 1909. Over the next half century, corporations gradually abandoned bearer bonds completely. Curiously, local and regional governments in the U.S. continued to use bearer bonds until the U.S. Internal Revenue Service outlawed their use after 1982.

Appearances. The formats and appearances of bonds were matters of corporate decision. Designs followed no set rules. Prior to the 1850s, most bearer bonds were printed in horizontal formats (wider than they were tall.) Bearer bonds usually had coupons attached that sequentially came due every six months.

From the 1880s forward, bearer bonds were normally printed in vertical formats (taller than they were wide). During that period, registered bonds were normally printed in horizontal formats and did not carry coupons. The American Bank Note Company normally designed their bonds so the word "Registered" appeared in a colored underprint. I stress again, however, that there were no set rules. 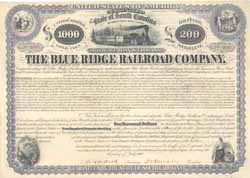 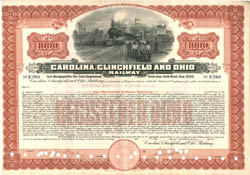 Registered bond from the Carolina Clinchfield and Ohio Railway, 1908

Send an email message with corrections, questions or comments about this page.