Areas of the world covered 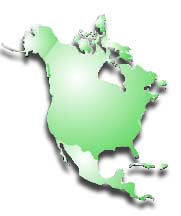 I try to list every certificate for every railroad in North America.

"North America" includes the land mass north of Panama border with Colombia, including all the Caribbean islands north of the South American coast, Hawaii and Greenland. This area encompasses 23 countries and several British, Dutch and French protectorates.

Catalog numbers are assigned to certificates based on company name, I maintain a list of every railroad and railroad-related company I have ever found reference to.

Please contact me if you specialize in non-U.S. countries and have special knowledge of rail companies in your area of interest. I particularly need help with Central American countries south of Mexico.

Here is a census of all railroad companies recorded in North America as of Sunday, May 15, 2022.