More than you ever wanted to know about specimens and proofs

Imagine an engraver working on a vignette that might take a hundred hours to complete. The image may look acceptable when carved in steel or copper. However, until the image is printed, the artist will never know how it will look on paper.

Similarly, imagine how hard it would be for letter engravers to notice minor spelling mistakes when carving 30, 40, or 50 lines of text - in reverse! Obviously, the easiest way to find mistakes is to print the engraving on paper. Proof impressions may represent fully completed designs, but they frequently represent partial impressions meant to check features before completion.

Engravers might have "pulled" proofs at any point in during the engraving or etching process. "Progress proofs" often represented successive impressions while artists and engravers make design improvements as they worked toward final designs. Proofs may also have represented quick tests to see if shading was too light or too dark or if designs would print well. Can you imagine the frustration if an engraver had worked for weeks on a portrait only to find that lines should have been carved in different directions because the plate would not take ink correctly?

"Color proofs" are fairly common. They were meant to test the appearances of borders when printed in color. Lathework border designs and underprints were meant to be unique between varieties, but the intricate designs did not always reproduce well in all colors. "Trial color proofs" were often experimental efforts to find colors that either printed well or were most attractive to clients.

"Cancellation proofs" seem to represent file copies of final plate designs. When plates were no longer needed, notes were often recorded on the proofs testifying to final uses and that plates were destroyed or rendered unusable.

Proofs were often printed on any kind of paper handy at the time. Paper might range from very thin, india paper to thick, soft card stock. Proofs appear on so many different kinds of paper that it seems apparent that paper quality was not terribly important.

It is probably easiest to think of proofs as "draft" copies. Exactly like the drafts of any artistic endeavor, proofs were meant to be ephemeral. Most were probably meant to be discarded. That fact that so many proofs survive is testimonial that many engravers must have been "packrats."

Proofs are NOT serial numbered. 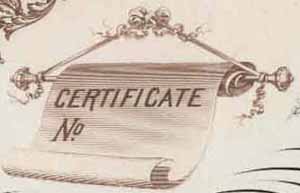 Proofs were never meant to circulate. They were intended for prosaic purposes such as error checking and record keeping. Most proofs are marked with pen, pencil and crayon. Many were folded and torn. Missing pieces are common. Coffee stains, even coffee cup rings, are common. That tells me that preservation was unimportant and an afterthought at best.

A large percentage of proofs are marked in some manner. Plate numbers in pencil are very common. Dated company approvals frequently appear on proofs of finished plates. Red or black crayon marks are extremely common, usually indicating dates or notes about destruction of plates. Unless otherwise indicated, you should assume that all proofs are marked in one or more places. Proofs were workaday items, never intended for issuance. Therefore there was never a need for formal cancellation. Some MIGHT have been cancelled, but I have never encountered any myself. 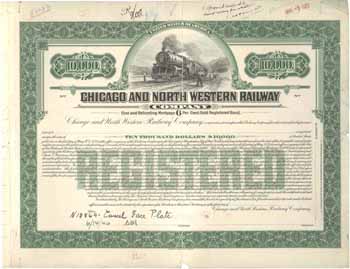 Proofs were often stored in engraving company files with letters, notes, and all sorts of peripheral material. Auction companies generally include related paper when selling proofs.

Proofs were meant to be draft copies, so they exhibit wide variations in appearance. They do, however, share certain commonalities.

With rare exception, proofs are unique collectibles. This makes proofs the quintessential example of how collector demand is dramatically more important than rarity.

In companies crowded with many different varieties of certificates, proofs often experience very little demand. Even though they are unique, some proofs may sell for under $30. Proofs from high-demand states where few companies are known (Texas, Washington, Alaska), proofs of any kind fetch high prices, even those in horrible conditions. 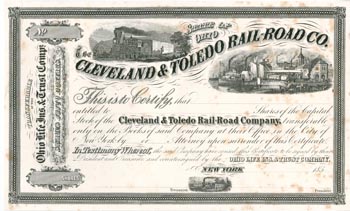 Most, if not all, proofs are in the collectors' market only because they were liberated from engraving company archives. Several large sales over the past quarter century have placed items from American Bank Note Company archives all over the globe. Proofs from smaller engraving companies, however, are very rarely encountered.

When auction companies sold American Bank Note Company proofs, they often sold the fronts and backs of certificates together. Throughout this catalog, whenever you see proofs of the faces of certificates listed, you may assume that proofs of backs probably exist, but I am lacking descriptions. Orphaned fronts, backs, and coupons, even single coupons, certainly exist, but my information about those items is meager.

Specimens were often preserved to help detect counterfeits. Many, however, were probably retained simply as file copies, as souvenirs and as promotional examples for futire engraving business. 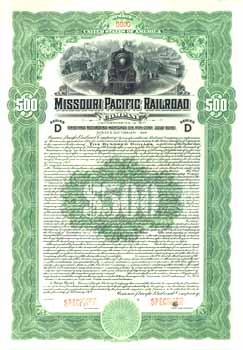 Many Canadian certificates were printed in England by Bradbury Wilkinson. Bradbury's specimens were usually numbered with a letter and a 1000 numerator (B1000, V5000 etc).

Security-Columbian Bank Note Company was notorious for not numbering its specimens. Its specimens were normally blank and often indistinguishable from normal unissued certificates.

Like every other "rule" in this hobby, specimens are also known with odd numbers. It appears that small printing companies often did not provide specimens to their customers. In those cases, companies often saved a few regularly-numbered certificates as specimens. Sometimes, they even saved issued and cancelled examples as specimens. In most cases, but certainly not all, companies stamped or hand-wrote the word "specimen" on certificates. These kinds of specimens often confuse new collectors because they don't look "official." Be aware that they most emphatically were official and they tend to be very scarce or unique.

The majority of specimens were neatly punch-cancelled with two 1/8" holes in the area meant for corporate signatures. Most were also rubber-stamped or overprinted with the word "specimen" in black, red or blue ink.

Bradbury-Wilkinson specimens were often pinhole cancelled with the word "Specimen" and a date. Beware that pinhole cancellations are often hard to identify in small or poor quality photos. Pinhole-cancelled American specimens (like this example from Hamilton Bank Note Co.) are somewhat uncommon.

Like everything else in this hobby, specimens do not conform to any 100%-reliable rule. That can make some specimens hard to distinguish from ordinary, unissued certificates. Normally, though, specimens share several of these features.

It is usually impossible to determine how many specimens may exist. Some specimens are assuredly unique, while as many as 25 examples may exist for others. For the most part, specimens are scarce to rare.

Like everything else in the hobby, specimens are priced by how much collectors want them. Simply put, prices are related to demand. It is very common for specimens from high-demand states like Texas to exceed $500, even $1500! At the same time, even in the same auction, equally rare specimens from common Eastern railroads may sell for under $50.

Many collectors buy only issued certificates and thereby avoid specimens. Beginners often avoid specimens because they do not know what they are all about. If specimens represent the only known examples of specific varieties, then collectors tend to pay high prices. Conversely, if certificates of the same variety are known in many different conditions, then pricing tends to be lower. If issued and unissued examples of the same variety are known, then specimens tend to be priced between unissued and issued certificates.

ONE FINAL NOTE...The harder one needs to work to prove whether a certificate was a specimen or a proof, the less it will be worth to another collector. The further things are from the "normal," the harder they are to convince another collector of their value.