What can serial numbers tell us?

Purpose of recording serial numbers. It is obvious that the original purpose of numbering certificates was to allow companies to track certificate sales and redemptions.

As collectors, we are greatly more interested in the relative rarity of different types of certificates. If we knew ALL serial numbers of ALL certificates still in existence, we could know very precisely the rarity of any certificate we encounter.

Unfortunately, no such record of serial numbers exists. Therefore, we need to compile that list a little at a time.

The myth that rarity equals price. Let's not overstate the case. A record of serial numbers would help us understand rarity. But, by itself, rarity does NOT establish value. Rarity influences desirability and desirability influences value. While it is generally true that all other things being equal (age, attractiveness, condition, autographs, etc.), rare certificates usually cost more than more common certificates. However, there are thousands upon thousands of examples where rare certificates sell for less than common certificates. I beg you, please do not confuse yourself into believing that rarity is the most important influence on value. 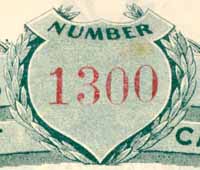 It would be nice to have a full record of all serial numbers from every variety of certificate, but that will never happen.

By the first quarter of 2012, about 106,000 serial numbers had been recorded. By mid-2015, the number had exceeded 122,000 and by the end of 2020 almost 148,000. Unfortunately, we have barely scratched the surface. We don't even know how large the number of certificate varieties might be, let alone the numbers of serial numbers. It could be in the millions. We may never even reach a million numbers, but the more we record, the better we can understand which certificates are rare and which are common.

I use a $20 minimum when recording serial numbers from eBay sales. Otherwise, I would not have time for anything else in my life. That minimum price means I purposely ignore large numbers of serial numbers.

"Some of your serial numbers seem wrong." Agreed. There are definitely inaccuracies in the database. Serial numbers come from thousands of sources and every source is prone to error. Be assured that accuracy ranges from perfect to highly questionable.

Handwritten serial numbers and dates can be very hard to read. Misinterpretations of handwritten dates are extremely common. Even experienced dealers and collectors make mistakes.

Sources of serial numbers in the database:

I do NOT include serial numbers from bond coupons. Just because coupons exist does NOT mean collectible bonds exist.

Accuracy of numbers. Photos from internet sources used to be downright awful, but they have been improving substantially as the quality of digital and smartphone cameras have improved. Still, the interpretation of serial numbers can be questionable.

Mistakes occur when reading characters of similar shapes, especially when characters are handwritten. These groups of letters and numbers are often confused with each other and cause the greatest number of mistakes: 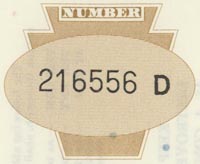 Prefix letters often indicate specific series of certificates. For instance, "C", "V" and "M" were commonly used as prefixes for serial numbers on $100, $500, and $1000 bonds. If a "C" serial number on a bond is reported for a variety otherwise populated by "M" prefixes, then an identification error is waiting to be corrected.

Prefix letters frequently indicated cities of issuance. You will often see serial numbers with "C", "P", "B", and "N" prefixes on near identical certificates that potentially indicate to issuance from Chicago, Philadelphia, Boston, or New York. It is not at all unusual to see similar serial numbers from the same variety issued many years apart with only the prefixes to inform the reasons.

Prefix letters on late-date certificates often indicated different series of issuances. This is particularly true as heavy trading in the 1960s and 1970s prompted the issuance and redemption of tens of thousands of certificates per day.

Without images, it is impossible to go back and confirm either serial numbers or curious dates.

Amateur sellers have created a large number of errors by reporting cancellation dates instead of issuance dates.

Several reporting errors on bonds have been traced to sellers having reported coupon dates instead of issuance dates.

With those warnings, I will nonetheless testify that collectors will encounter valid serial numbers out of date order.

Normally, when stock certificates were sold to new investors, old certificates were sent back to companies. Those companies then transferred ownership and issued new, higher-numbered certificates. For unknown reasons, some companies recycled their old numbers. When issuing new certificates, a few companies indicated their actions with suffixes. As with prefixes, most people fail to notice or report suffix letters. They are, in fact, highly important.

Similarly, certificates intended for sale may have been divided into batches and given to two or more brokers, trust companies, transfer agencies, or exchanges for issuance. In those cases, serial numbers were NEVER issued in date order.

Gaps in numbering. Companies often switched designs of certificates when they ran out of their initial supplies. As a rule, most companies maintained their original numbering schemes, but frequently skipped a few hundred or a few thousand numbers between successive certificate orders. Consequently, large and legitimate gaps may occur in serial numbering.

Unless entire books of certificates have been reported, gaps occur in every variety. Take, for instance, BAL-662b-S-30. Only a couple hundred extant certificates have been reported out of a known range of 58,226. Do the other certificates exist? I would not be at all surprised if 10,000 or more examples of S-30 exist. I doubt, however, today's collectors will ever report more than a few hundred. We will be left with thousands of numbering gaps. Regardless of how many certificates we may think exist, most of us would agree that S-30 from the Baltimore & Ohio Rail-Road Co. is a very common certificate.

On the other hand, there are many varieties of certificates represented by only two or three widely-spaced numbers. How many certificates exist within those large gaps. Ten? Twenty? Fifty? In most cases, we won't know for decades. Every new serial number that comes in improves our understanding. However, I cannot imagine ever having complete numbering sequences.

I guarantee you WILL find strange and inexplicable numbering. It is best to assume that about half of the examples of strange serial numbering had legitimate reasons. The other half are probably entrenched mistakes. You will drive yourself crazy trying to unravel all the possible reasons for odd numbering.

Some strange numbering results from listing behavior of catalogers and dealers. Many auction catalogs (particularly German catalogs) show pictures of serially-numbered certificates very much different from the dates and serial numbers actually being offered for sale. If correspondents report those serial numbers to me, they may not realize they are mismatching dates and serial numbers. Contributors also may not realize there are varietal differences that catalogers consider unimportant.

These inadvertent mistakes are the main reason I now require images before adding serial numbers to the database. (See below.)

Do not be overly demanding in your pursuit for low serial numbers. They may not exist.

Need more convincing? A deeper review of the database suggests that almost one third of all varieties of stock certificates probably had a minimum serial number higher than 500.

Want to help contribute serial numbers? Please send scanned images or black-and-white paper copies of your certificates. I will not enter serial numbers from lists and spreadsheets. I know that sounds harsh and demanding, but it is important to understand that images:

If wanting to contribute serial numbers, please send scanned images or black-and-white paper copies of your certificates. In the long run, I have found that raw lists of serial numbers usually create more problems than they solve.

Please review my Priorities table to see the tasks I consider most important for this project. You will notice that I list serial numbers from lists among my lowest project priorities. I stress in the strongest possible way that raw serial numbers give me absolutely no ability to check for errors or variety breaks.