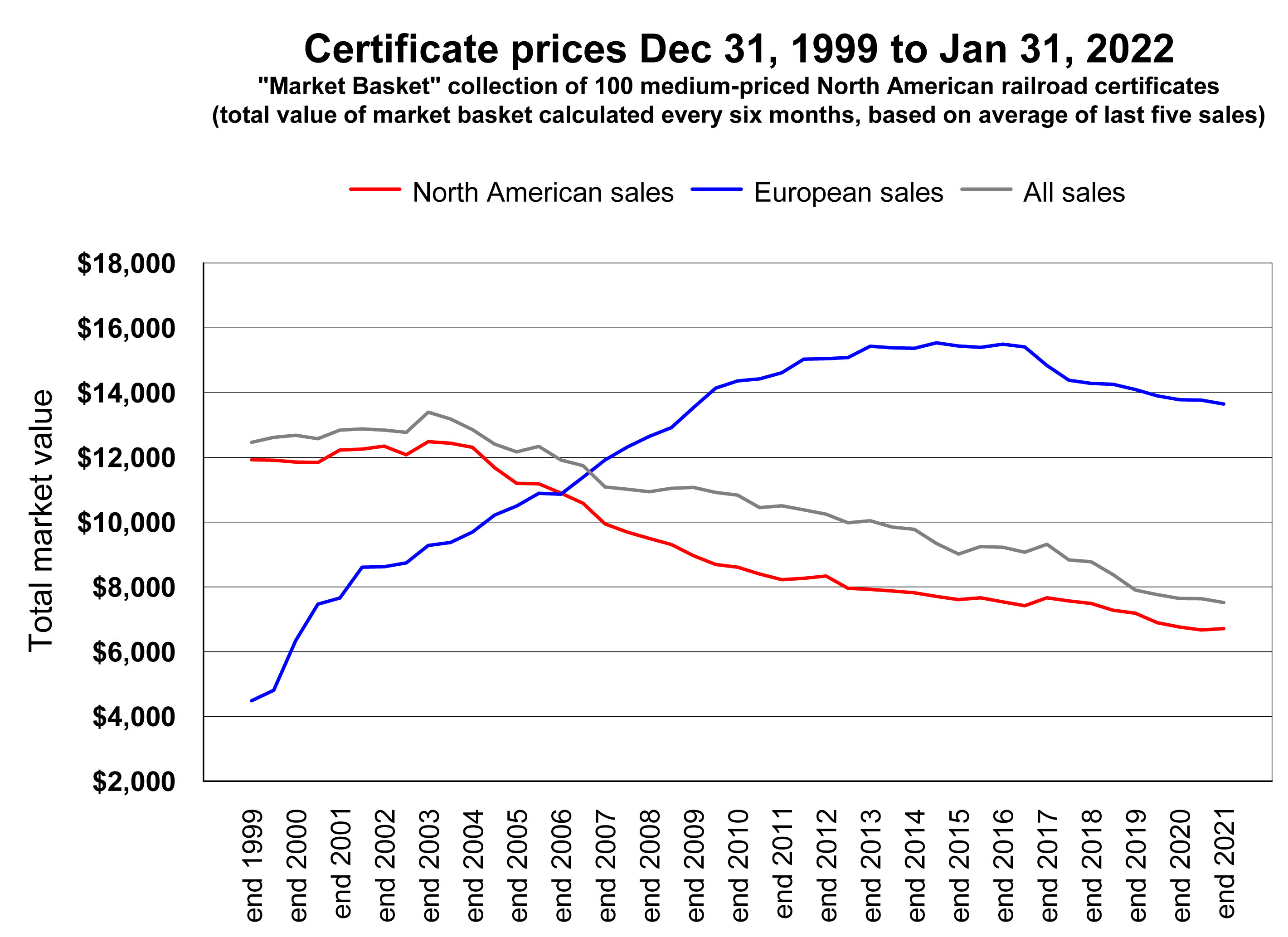 Discovering long-term price behavior. As most of you know, I record prices for every sale of North American railroad certificates I can find. By 2004, I had been collecting prices for well over ten years. At that time I noticed prices for many certificates were softening. I decided I needed a method of measurement to determine whether my feelings were correct.

I needed some method of measuring the overall market, not just single items. I realized I needed to create some sort of market index. The question was, what to include in the index?

Highly-rare items appear for sale very infrequently and usually only in live auctions. Prices realized from those auctions may not represent widespread demand so much as the ability of auction houses to promote sales. For instance, one auction house might outsell another equally-qualified organization simply because its mailing list of buyers is larger. Similarly, an acution house that delivers its catalogs three weeks in advance of sales usually outsells one with a shorter lead times. The result is that the prices of rarities is highly variable.

The prices of common items are also highly variable. Oftentimes, dealers can sell super-common items only by lowering prices to wholesale levels or lower. In fact, some dealers could probably give away common items and net a profit merely by freeing up valuable storage space. The potential pitfalls of measuring common certificates is fraught with as many problems as rarities.

It ultimately made sense to look at medium scarce items. These are the kinds of items that intermediate and advanced collectors are always seeking to purchase. Taking the lead from typical stock market indexes, I tried to find a "market basket" of collectible certificates that met certain criteria. I reasoned that if we could track a sufficiently large number of medium-scarce certificates over a sufficiently long time, we should be able to discern trends in the collectors' market.

I conducted numerous searches of my database and initially compiled a list of 125 possible certificates for the "market basket." Almost two-thirds of the varieties in my initial selection failed one or more of the criteria listed above. Ultimately, my "market basket" of certificates shrunk to 43 primary varieties.

Modification to a 100-certificate "market basket." In 2017, with records of over a million sale appearances, I examined populations again. With the perspective of an additional thirteen years, I decided that the ten-year familiarity requirement was unnecessary. In its place I substituted a more generous requirement that certificates needed five recorded sales prior to Dec 31, 1999.

I also relaxed the requirement that certificates needed to appear for sale twice a year. Rare and mid-rarity certificates tend to appear and disappear in cycles rather than come up for sale in predictable frequencies.

These modifications allowed me to add 57 more varieties to the original 43.

What certificates are included in my "market basket" index? They are medium scarce certificates that tend to appear in formal live auctions. Unfortunately, as the number of formal auctions has dropped, many of those certificates are now appearing more and more frequently on eBay.

You may see images of all certificate varieties either as a collection of images and as individual listings. Both formats show the same information.

How to smooth out the effect of "wacky" prices. It is extremely common to see medium-scarce certificates sell for $200 in one sale and $40 in the next. Large price ranges are common. Radical price behavior is the rule, not the exception.

This means that certificate prices are "spiky." If we plotted every sale of a "market basket" certificate, we would be unable to detect trends; there would bee too many up and down jags. One of the ways to smooth spiky data is to display averages of prices through time instead of single prices. So, if we had a collection 100 prices, we could average the last two prices through time and display those averages on a chart. That is]]would be called a "two-sample moving average."

It stands to reason that the more sales we average, the smoother our price chart becomes. Oddly high and weirdly low prices become less and less noticeable as we add more and more samples to a moving average. In the case of collectible stock and bond prices, a 10-sample moving average would be nice, but we have an insufficient number of sales for such an average. After experimentation, it appears a 5-sample moving average removes the effects of extreme price behavior fairly efficiently.

(It would be wonderful if we had records of dealer sales, but those transactions are hidden from view. Dealers do NOT send me indications of their sales.)

Graphs of moving averages show trends very clearly, but they have a downside. They are "lagging" indicators. They do not show the value of the last sale, but the average value of the last five sales. In other words, it takes two or more sales at higher prices to display a reversal of declining prices. In our case, where sales are few and far between, the chart of 5-sample moving averages will always trail the current market by six months to a year!

Analyzing the index. It is important to realize that this index DOES NOT and CAN NOT measure the entire breadth of the market. There is no market-wide price reporting system; dealers keep their sales secret and few collectors report their purchase prices to me. Moreover, I cannot possibly record all auctions and transactions that take place.

Acknowledging those limitations, I feel the index represents a reasonably consistent measurement across a fairly wide selection of RAILROAD certificates. The goal is not to establish a perfect index value; the goal is to spot trends and the trend has been down.

It is apparent that the hobby suffered dramatic price drops after 2003. Dealers tend to blame the decline on eBay and I FULLY AGREE! We could argue the reasons for low eBay prices ad nauseam, but agreement is unimportant. We cannot do anything about the price decline until we understand it. This last few price charts suggest several important conclusions to me.

This price index represents a market basket of 100 medium-scarce varieties from North American railroads. I do NOT imply a correlation to certificates in any other specialty.