(This article appeared in the November 1991 issue of the International Bond & Share Society Journal. I strongly urge anyone interested in this fascinating hobby to become a member. See the Society's website at http://www.scripophily.org. This article reproduced with permission.)

A Canadian member has presented a problem, which research in four countries has been unable to resolve.

He has several similar bearer certificates, apparently issued in Montreal in 1911, for a 'share' of £100, the holder of which was entitled to a 'participation in the original stock at a nominal amount of one hundred pounds sterling.' The design and printing are typically German, the amount in figures is shown as 'L 100' (never seen on UK/Canadian pieces), the company name is given as Canadian-Pacific-Railway-Company (also unthinkable on a Canadian piece), the signatures, although not very legible, are Germanic in style, and it is fairly obvious that the piece is of German origin. But why is it in English? We see plenty of bonds issued by for foreign railway companies in France, Holland, Germany, etc., and they all have the text in their own language (with perhaps English as well.) However, there is no indication of any German issuer of the certificates. The signatures are described as 'Board of Directors' and 'Managing Committee,' but, while not very legible, do not match the names of Board and Committee members at that date. There is no company seal or duty stamp on the certificates.

Canadian Pacific shares were introduced to the German market in 1895, soon after their first issue, and were quoted on the Berlin, Hamburg and Beslau stock exchanges, at least until 1914. However, as far as we can tell, there was no CPR stock register in Germany, and all stocks traded in Germany were registered on the New York or Montreal registers. An immediate assumption would be that these papers are German certificates for U.S./Canada registered CPR shares. CPR was quoted on the Amsterdam Stock Exchange in 1911, yet there were apparently no special Dutch shares at that date. While we see plenty of Dutch certificates for other North American stocks, they state very clearly who has issued the certificate, who has signed and in what name, exactly what stock is covered, etc. The same is true of bearer certificates for CPR stock, issued in London by Westminster Bank in the 1930s. However, these characteristics are totally missing for the German pieces.

It is far from clear just what stock is represented by the German pieces. The CPR common stock was designated in dollars. While there were preference and debenture stock issues (in 1893 and 1888, respectively) in sterling, neither of these can easily be understood as 'original stock.'

The certificates have been presented to CPR in Montreal for their comments. They say that CPR has never issued such certificates, that these are fraudulent and of no value., it is difficult to believe that it would have been worth while for anyone to forge such pieces, and it seems possible that the CPR is wrong, and that the certificates were issued in Germany in 1911 on behalf of CPR. But by whom, and for what purpose, we do not know. Members' comments would be very welcome. 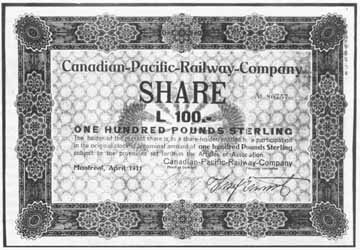 (Although supposedly dated at Montreal, 1911, this certificate is very similar to other German certificates of the era. Listed in my database as CAN-387a-S-30.

Certificate for 10 shares in the C.P.R., and quite a rare item. Interestingly, in the present context, this piece was issued to C. Schlesinger-Trier & Co in 1911. This bank, based in Berlin was one of the two companies in Germany marketing C.P.R. paper. The reverse bears the bank's stamps showing dividends paid quarterly from 1911 to July 1914 (just before the outbreak of WWI), and is blank-endorsed by the bank, with a Berlin address. On the face is the German Tax-stamp, dated 1911, bank stamps for 'Rights Claimed' and a 'Valeurs Mobilières Etrangères, Alsace-Lorraine, 1921' stamp; presumably the beneficial owner lived in Alsace-Lorraine, German to 1918 and French thereafter.