I have had tens, maybe hundreds, of correspondences with highly qualified collectors who have argued that I should consider expanding my project in one direction or another.

The type of collectibles that has caused the greatest controversy is railroad currency. The most distracting has been railroad currency purposely worded like short term "notes." That particular type of railroad currency, like the examples on this page, promised repayment in six or twelve months with interest. 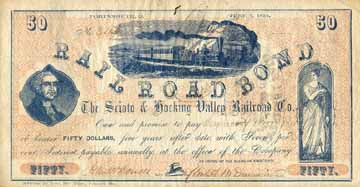 I accept that some of those problematic documents MAY have been intended to raise money outside of the normal channels of stock issuance and bond sales. But let's go back to the beginning.

I originally designed this project to catalog collectible stocks and bonds from North American railroads.

Of necessity, certain types of documents did not fit clean definitions. Even from the earliest days, I included peripheral documents that collectors confused with legitimate stocks and bonds.

With time, I allowed the project to expand to include documents that were VERY CLOSELY related to the sale of stocks, bonds and equipment trusts. In doing so, I listed certain types of financial documents that never appeared in any other collectibles catalogs.

After BNR Press published the first edition of my catalog in 1995, though, it became obvious that I had to create definite limits to the project. Even after all this time, maintaining a clear boundary around my project remains challenging. Every time I try to limit the project in one direction, collectors try to convince me to expand my project elsewhere.

The most persistent demand for expansion has been railroad currency. Collectors have tried for years to convince me to include (or keep) "a few types" of railroad currency that are worded like short-term bonds. (For a while around the time I published the second edition, I actually included a few such "bonds", but have since removed them.)

It would take no large amount of effort to include five or ten items like these short-term "bonds." That is not the real problem. The real problem -- and it is a very large problem -- is that caving in on that demand would merely open the door for the next group of items. And the next. And the next after. Anyone who thinks the demands for project expansion would end with a few pieces of railroad currency has not spent ten to twenty hours per year since 1995 explaining why other off-topic collectibles do not belong. In short, I have spent years learning that the demands for adding "only a few more items " to the catalog would NEVER stop THERE!

Paper money issued by railroads has proven the most frustrating of collectibles to limit. The decision to keep paper money out of my project is made doubly difficult by the fact that it remains one of my most favorite collectibles. As many of you know, I came to the stock and bond hobby through my paper money hobby.

In order to create a clear line between paper money and collectible securities, I use the "duck test". For the purposes of this project,

it is paper money.

I welcome arguments to the contrary. I do not mind argument. But please be aware that, for the purposes of this catalog about stocks and bonds, I will continue to exclude paper money, railroad passes, railroad tickets, timetables, photographs, postcards, brochures, letters, invoices, annual reports, etc.

Ultimately, my non-yielding argument against the inclusion of paper money boils down to one simple fact. I do not have the time.

I beg anyone interested in the fascinating field of railroad currency to take up the challenge.

Create a catalog for collectors. Richard Hoober laid out the backbone of the project in a series of 33 installments in Paper Money magazine. By my count, he described and listed about 845 pieces of railroad currency over the course of his seven-year project. In the years that have followed, many more unlisted items have been discovered and sold in coin and paper money auctions. If you want a challenging and fulfilling project that will occupy you for decades to come, please, please, please take up where Mr. Hoober left off.

Tell me when you're ready to start and I will be your first contributor. Just make sure you draw a crystal clear line around your project!