My goal as a cataloger is to identify certificate "varieties." The definition of "variety" means different things to different people.

In my system, varieties are groups of certificates that share identical appearances and purposes. To me, a variety should be able to clearly identify certificates within a single company based on their shapes, denominations, colors and purposes. The definitions of varieties must be sufficiently flexible to allow for differences in the ways certificates came into existence. Finally, definitions must also allow tolerance for sizes, ink colors, paper colors, serial numbers and a host of the other differences we encounter that reflect issuance, circulation, storage, redemption and cancellation.

The task of identifying varieties would be simple if we had examples of all certificate just as they came off presses. That ideal does not exist, of course, but if it did, we would still have problems. Problems have always arisen because companies changed rules constantly after certificates were printed. Companies frequently changed stock par values and capitalization amounts. They always changed corporate officers and trust companies. It was not uncommon for companies to change certificate denominations and essentially every company changed corporate names at some point. If companies responded to changes by merely altering certificates instead of printing new ones, we are left to decide whether those changes created new varieties or not.

The classification of altered certificates is challenging and subject to disagreement. I want to be as consistent as possible, but I also want to minimize overly complex, flyspeck varietization. Consequently, I created a single rule for deciding whether altered certificates deserve new variety numbers:

Certificates altered as a result of official corporate decisions at the level of boards board of directors are considered separate varieties.

The corollary to this rule is:

Certificates altered by non-board actions are not considered separate varieties.

Certificate alterations caused by individual, minor, incidental, accidental or non-corporate decisions are ignored for varietization purposes. Those include changes by clerks, banks, trust companies, unrelated companies, states, counties and courts because they were out of the control of issuing companies.

Following is a collection of the various certificate alterations I encounter and how I have chosen to deal with them when deciding whether to make new varieties or not. 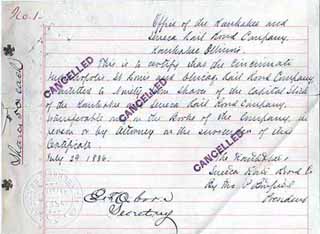 Hand-composed certificates generally constitute the very earliest evidence of companies. They tend to be unique or nearly unique. Essentially all were legal documents. Only a handful of such certificates survive.

Corporate names modified to other names.

When companies merged or consolidated with others, it was relatively common for them to use some remaining certificate for the new company. While companiesnormally ordered new certificatesfairly quickly, they often had to make do if they sold shares before new certificates arrived. In those cases, companies usually changed old names for new purposes. Hand-altered certificates are seen rather frequently.

When companies became successful, their share prices tended to rise. Overly expensive stock frequently became less attractive to small investors. In the United States, it seems common practice for companies to "split" stock once prices remain over $100 per share for extended periods.

Companies split their stock by lowering their shares' official par value and then issuing more stock. In other words, if the par value of a company's stock was $100 per share, but shares had been selling for $150 in the open market, that company might decide to split its stock "two for one." The company would issue new stock at $50 par and trade two of its new shares for each share of old stock. Theoretically, shares would then trade onstock exchanges for about $75. "Two for one" splits are common, followed by "three for one" and "four for one" splits.

The most common types of altered capitalizations seem to be handwritten. Typewritten and rubber-stamped changes are less common. Except for the Little Miami Railroad, over-printed changes were even less popular. (The Little Miami is known to have issued six varieties of certificates with capitalization changes.)

It is very common to encounter only a tiny handful of certificates within a variety that show capitalization changes. The reason is not known, but it appears clerks grew bored with the process and often gave up after short periods of alterations.

These are considered distinct varieties when printed

Hand-altered certificate denominations are very common. Because those kinds of changes represent convenience, frugality, and laziness, I consider them to be of negligible importance. 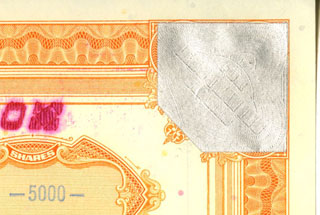 On the other hand, if companies contracted with printers to alter large numbers of certificates, I consider those changes to represent formal corporate decisions. Alterations like shown at bottom left represent legitimate varieties.

Stock certificates from several companies are known to have been hand-altered from "capital stock" to "preferred stock" and occassionally to "common stock."

Preferred stock has very rights relative to both dividends and division of proceeds in the event of corporate failure. Even if notices of stock type are handwritten, alteration of certificate types deserves distinct variety numbers.

While trust company names changed frequently on long-lived certificate varieties, the exact reasons for their changes will never be known. In some cases, changes might reflect board decisions. In general, though, trust companies (including investment, savings and retail banks) changed corporate identities and went out of business just like railroad companies. Mergers, consolidations and bankruptcies were common. Since those kinds of companies were independent of railroad companies, their names on certificates are generally considered unworthy as a determinant for varietization.

There are few extraordinary exceptions where certificate designs changed at the same time as trust/bank company names. In a few rare cases, design differences are harder to identify in poor quality photographs than trust/bank company names. In those cases, varieties are identified by the most blatant differences, even if those features are trust company or bank names.

In order to improve consistency and decrease oversights, companies commonly pre-printed repetitive parts of dates. The most commonly seen pre-printed dates include "1____" , "18___" and "19___." Pre-printed dates such as "185__", "186__", "187__" and "188__" are fairly common, but often altered to accommodate issuance as long as sixty years after those decades had elapsed. Since those kinds of modifications had no importance to boards of directors, changes to pre-printed dates are ignored for the purposes of establishing varieties.

Decisions about high-level employment positions were certainly made at the board of directors level. Yet, no matter how important certain individuals might have been, changes in personnel were nothing more than normal and ordinary business decisions common to every company.

20th century certificates frequently show differences among facsimile signatures of corporate officers. It is true that certificates with various were prepared and printed separately, sometimes five or ten years apart. However, each change still represented ordinary day-to-day operation of companies. For that reason, I consider variations in pre-printed corporate signatures to be ordinary "course of business" variations at the level of minor importance. 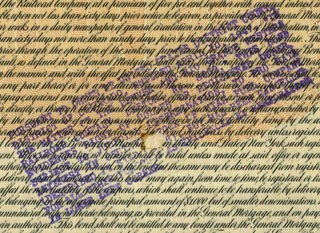 Type of alteration: Overprint changes to bond and stock conditions.

Bonds are official, contractual obligations between companies and debt-holders (people who owned bonds.) Theoretically, bonds could not be modified without the agreements of both parties. Official corporate changes to bonds are rare.

On the other hand, numerous overprints are known on bonds and small numbers of stock certificates where repayment or ownership conditions were altered by courts during bankruptcy proceedings. The most common changes to bonds indicate amounts of partial repayments made to bondholders after dissolution or sale of assets. Many of those alterations have been erroneously recorded as cancellations by sellers. Because those marks often recorded partial bond repayments, they constitute a form of partial cancellation. Nonetheless, bonds still retained partial value after the last overstamp, so we cannot consider them officially "cancelled."

Regardless of purposes, such overprints of overstamps represent changes to certificate terms and conditions well after companies and boards of directors ordered certificate printing. Consequently, I cannot consider them to be separate varieties. 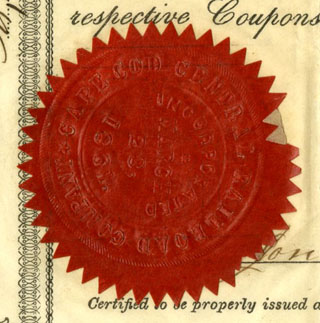 Prior to the last few decades of paper certificate issuance, it appears that most states required impressions of corporate seals into stocks and bonds as conditions of legitimate issuance. The application of ornamental paper and foil seals, however, seems to have been unofficial andcarried no particular importance. At the very least, there was not consistent use of paper or foil seals across state borders, companies or decades.

It is as yet unknown whether particular colors or types of paper seals carried any corporate significance for single companies. So far, variations have appeared so great that it seems absurd to assign varieties on the basis of applied seals.

There is, however, an overwhelming problem in using embossed seals to determine varieties. Embossed seals areimpossible to see except in the best, highest-resolution, specially-staged photographs. I have never seen a seller mention details of embossed seals. So, instead of basing varieties on embossed seals (IF they are ever reported) I will suggest that divisions be made simply on the basis of issue dates.

Changes to place of issuance.

A substantial number of companies pre-printed places of official issuance on their certificates. Those places were occasionally altered when certificates were issued elsewhere. Place of issuance, however, was strictly informational. To my knowledge, printed place of issuance never carried legal ramification. As long as certificates were issued from the states where companies were incorporated, issuance from different places was immaterial.

Some collectors disagree. Some of my varieties might seem too microscopic or too broad. Some collectors can legitimately ask how they can tell whether decisions were made at board levels or elsewhere in organizations.

We will never know who made decisions at most companies. The vast majority of corporate records are either lost or effectively impossible to find. However, many corporate laws are grossly similar from state to state. I suggest that certain types of decisions could only have been made at the highest levels. Such decisions include changes to par values of shares, changes to corporate capitalizations, changes to corporate names, and changes to the types of bonds and shares issued. All those decisions determine how much money a company might raise by selling shares and even how easily it might be able to sell shares.

Decisions about alteration of less importance could have been made at board levels, of course, but generally were made at lower levels at most companies. It seems highly unlikely that a board would have voted on what color of paper seals to use or where to scribble the word "preferred."