I receive frequent inquiries from people who wonder how they can redeem their $1,000,000 bills printed by the American Bank Note Company.

Here are the facts:

If you are more interested in the million dollar note, here is what little I know.

This particular note first came to my attention in 1988. It was engraved by American Bank Note Company for the International Association of Millionaires (IAM). When initially released, IAM sold these notes for around $25 each.

The International Association of Millionaires still exists. As of December, 2020, IAM offered uncirculated, crisp examples of million dollar notes for about $110 apiece, with discounts for quantity purchases. 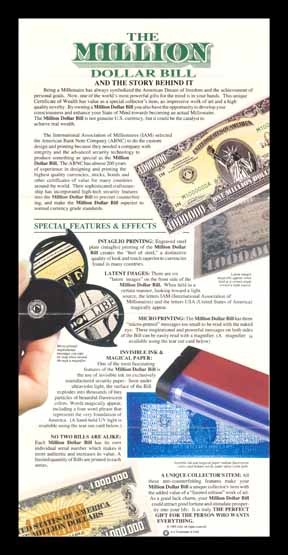 In 1988, the note was accompanied by a four-color brochure that explained the note's security features. Additional promotional materials included a "Certificate of Authenticity" show below. 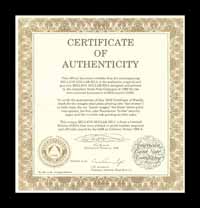 Approximately 4,000 people come to this page each year, generally with one of these questions.

Can I redeem this note for a million dollars?

How much can I sell this note for?

The answer to the first question is NO. These notes were printed as souvenirs. They have absolutely no value as currency

The answer to the second question, however, is yes. It does have some value as a collectible. Search eBay and various North American dealers in collectible currency.

Admittedly, the notes DO look genuine. An old-time dealer named Hy Brown sent one of these notes to me in 1988. Four years later, the Chicago Tribune (Aug. 25, 1991) reported that the Secret Service had confiscated twenty of the notes from Hy at his table at the ANA's "Word's Fair of Money" show in Chicago (Aug. 14). While the Service never pressed criminal charges, I don't think it ever gave the confiscated notes back to Hy Brown. At the time, I always wondered how the Secret Service could have thought that anyone would have mistaken them for genuine currency. The number of visitors to this page every year tells me, "Quite a few."

One of the complaints voiced by the Secret Service was size – identical to U.S. currency. Although not identical, the paper was also somewhat similar. Moreover, the quality of the engraving and printing was unassailable. American Bank Note Company had included numerous security features that had never been used on American currency. In that respect, these notes were superior to U.S. money at the time. Thankfully, the U.S. government later included many of the same security features that we now see on U.S. currency.

If you came to this page because of the million dollar note shown, and want to know how to collect $1,000,000, please examine your note closely and look for these features: 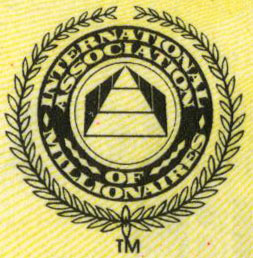 If you want to learn more about the American Bank Note Company notes, please contact some of the fine dealers who sell these souvenirs. You may find them on the web by searching Google for "million dollar bill" "american bank note company" (with quotes).

That is enough talk about the IAM bills. Let's consider the hundreds of lower quality notes printed on ordinary offset presses and color copiers. They are produced solely as giveaways, souvenirs and promotions. If anyone mistakes them for real, I advise them to search for "million dollar bills" on eBay. They can easily find many hundred offers, often for as little a a few cents each.

Here is an example of one of the better souvenir million dollar bills that cross my desk. It is extraordinary with its four-color offset printing. Is it going to fool someone? Sadly, I imagine it will. You may see a few more on this site at million dollar bills.

Send an email message with corrections or comments about this page.

I'm sorry, but I will NOT answer questions concerning redemption of these notes. I will not answer questions about collectible values because I have no information. Please check eBay or contact some of the many fine dealers in paper money.